The Beginnings at Manchester


Adams County lies on the Ohio River fifty miles east of Cincinnati and one hundred miles south of Columbus, the state capital of Ohio. It derives its name from John Adams, second President of the United States. It was formed 10 Jul 1797 by proclamation of Governor Saint Clair, being then one of the four counties into which the Northwest Territory was divided.

The first settlement within the Virginia military tract, from which Adams County was created, and the only one between the Scioto and Little Miami Rivers until after the treaty of Greenville in 1795, was made in this county at Manchester by the (then) Colonel (and later General) Nathaniel Massie.

Nathaniel Massie, in the winter of 1790, determined to make a settlement in Adams County that he might be in the midst of his surveying operation and secure his party from danger and exposure. In order to effect this, he gave general notice in Kentucky of his intention, and offered each of the first twenty-five families, as a donation, one in-lot, one out-lot and one hundred acres of land, provided they would settle in a town he intended to lay off at his settlement. His proffered terms were soon closed in with, and upwards of thirty families joined him. After various consultations with his friends, the bottom on the Ohio River, opposite the lower of the Three Islands, was selected as the most eligible spot. Here he fixed his station, and laid off into lots a town, now called Manchester, at this time a small place, about twelve miles above Maysville (formerly Limestone), Kentucky. This little confederacy, with Massie at the helm (who was the soul of it), went to work with spirit. Cabins were raised and by the middle of March, 1791, the whole town was enclosed with strong pickets firmly fixed in the ground with block houses at each angle for defense. Thus was the first settlement in the Virginia military district and the fourth settlement in the bounds of the State of Ohio effected. Although this settlement was commenced in the hottest Indian war, it suffered less from depredation, and even interruptions from the Indians, than any settlement previously made on the Ohio River. This was no doubt owing to the watchful band of brave spirits who guarded the place — men who were reared in the midst of danger and inured to perils, and as watchful as hawks. Here were the Beasleys, the Stouts, the Washburns, the Ledoms, the Edgingtons, the Denings,the Ellisons, the Utts, the McKenzies, the Wades, and others, who were equal to the Indians in all the arts and stratagems of border war. As soon as Massie had completely prepared his station for defense, the whole population went to work and cleared the lower of the Three Islands, and planted it in corn. The island was very rich, and produced heavy crops. The woods, with a little industry, supplied a choice variety of game. Deer, elk, buffalo, bears and turkeys were abundant, while the river furnished a variety of excellent fish. The wants of the inhabitants, under these circumstances, were few and easily gratified. When this station was made, the nearest neighbors northwest of the Ohio were the inhabitants at Columbia, a settlement below the mouth of the Little Miami, five miles above Cincinnati; and at Gallipolis, a French settlement near the mouth of the Great Kanawha.

The station being established, Massie continued to make locations and surveys. Great precautions were necessary to avoid the Indians, and even these did not always avail, as is shown by the narrative of Israel Donalson's captivity.

Manchester, one of the oldest settlements in the State, is on the Ohio, sixty miles east-southeast of Cincinnati, twelve miles above Maysville KY, and at the foot of the Three Islands. It was widely known early in the nineteenth century to the traveling public, being a point of transshipment on the great stage route east from Lexington to Maysville and from here through Chillicothe, Zanesville, Wheeling, etc. UP to 1846 it was an insignificant place having at that time not exceeding fifty dwellings. It is now [1886] the largest town in the county. It has churches, two Methodist and one Presbyterian. Newspaper, Signal, Independent, J. A. Yerry, editor. Banks, Farmer's, W. L. Vance, president, I,. Pierce, cashier ; Manchester,, R. H. Ellison, president, C. C. W. Naylor, cashier. 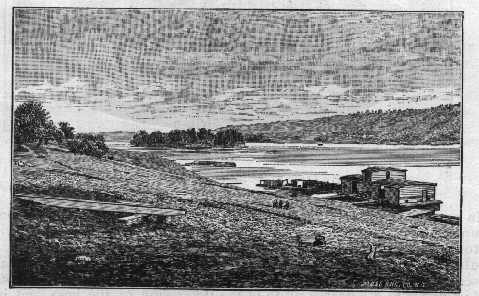 Illustration by Edward R. Gregory (1887).
THE LOWER OF THE THREE ISLANDS AND LANDING, MANCHESTER

Manchester was the fourth point permanently settled in the State which has developed into a town, the other three being Marietta, Gallipolis and Cincinnati, the last named originally called Losantiville.

Those who have seen only the rivers of the East, as the Hudson, Delaware, Connecticut, etc., can have no adequate idea of the topographical features of the Ohio. Those streams come up within a few feet of the meadow lands or hills wherever they bound them. Not so the Ohio. This stream occupies an excavated trough, where in places the bounding hills rise above the water 500 and 600 feet.

The river is highly picturesque from its graceful windings, softly wooded hills and forest clad islands. In but few places is it more pleasant than at Manchester.

The islands in the river are all very low. They were originally formed on sand-bars where floating trees lodged in seasons of freshets and made a nucleus for the gathering of the soil which is of the richest. In the June freshet they are overflown, when with their wealth of foliage they seem as huge masses of greenery reposing on the bosom of the water.

Those born upon the Ohio never lose their interest in the beautiful stream; and few things are more pleasant for the people who dwell along its shores than in the quiet of a summer's evening when their day's work is done, to sit before their doors and look down upon the ever-flowing waters. Everything is calm and restful: varied often by the slow measured puff of an approaching steanner, heard, maybe, for miles away, long before she is seen, or if after dark, before her light suddenly bursts in view as she rounds a bend.

Up to within a few years the barren hills in this and some other river counties remained in places the property of the general Government. They afforded, however, a fine range for the cattle and hogs of the scattered inhabitants and no small quantity of lumber, such as staves, hoop poles and tan bark, which were taken from the public lands.


From HISTORICAL COLLECTIONS OF OHIO IN TWO VOLUMES
An Encyclopedia of the state: History both general and local, geography with descriptions of its counties, cities and villages, its agricultural, manufacturing, mining and business development, sketches of eminent and interesting characters, etc., with notes of a tour over it in 1886.
The Ohio Centennial Edition - Henry Howe, LL.D. [© 1888]