The annexed view below shows on the left the jail and market, and in the center, the Court House and county offices. These last stand in a pleasant area shaded by locusts. 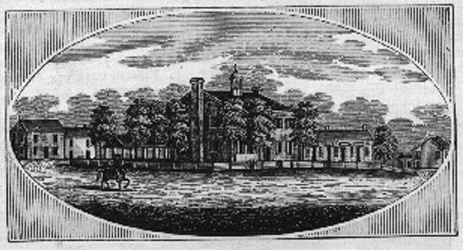 Drawn by Henry Nowe in 1848.
THE COUNTY BUILDINGS, WEST UNION.

The Court House is a substantial stone building and bears good testimony to the skill of the builder, ex-Gov. Metcalfe of Kentucky, who commencing life a mason, acquired the sobriquet of "Stone Hammer." The first courthouse was of logs. West Union contains four churches, one Associated Reformed, one Presbyterian, one Methodist, one Baptist; two newspapers, a classical school, and nine mercantile stores. It had in 1820 a population of 406; in I830, 462.

The name of West Union was given to it by Hen. Thos. Kirker, one of the commissioners who laid it out in 1804, and one of its earliest settlers. In 1880 its population was 626; 1886 school census, 317. It has one bank, that of Grimes & Co.; and three newspapers, viz., New Era, Republican, Mrs. Hannah L. Irwin, editor; People's Defender, Democratic, Joseph W. Eylar, editor; and Scion, Republican, Samuel Burwell, editor. It has also a Children's Home with forty-one children. The buildings are large and the appointments excellent.

In reply to an inquiry, Hon. J. L. Coryell of West Union has sent us a communication giving brief mention of valued characters identified with the history of Adams County. Such an one upon every county in the State would be a benefit serving to bind the people of the commonwealth in closer fraternal bonds through the greater mutual knowledge thus obtained, and minister to a laudable pride in the possession of the laws and institution that could give the highest wealth of character. He was prompted to thus aid us through his memory of the old edition, a copy of which he earned when a youth by chopping wood at twenty-five cents a day. Thus writes the Judge:

Adams is an old and pretty good county and has an excellent history. She has had many good men, denizens, citizens and residents, native and to the manor born. Among the former were Gov. Thomas Kirker, John Patterson, marshal of Ohio about I840, John W. Campbell, congressman, and U. S. Judge. Col. J. R. Cockerill who died in 1875, succeeded Gen. J. Darlinton as clerk of court. Darlinton was a good and useful man. Cockerill was one time member of Congress, Colonel of 70th O. V. I., a highly valued citizen. He was the father of Col. John A. Cockerill who was born near the Serpent Mound: at about fifteen years of age was a drummer boy at Shiloh. He afterwards edited papers in Adams and Butler counties and was managing editor of the Cincinnati Enquirer; later traveler and correspondent in the far East, Turkey, etc.; then edited the Post Dispatch of St. Louis; now is the managing editor of the New York World, a brilliant young man.


From HISTORICAL COLLECTIONS OF OHIO IN TWO VOLUMES
An Encyclopedia of the state: History both general and local, geography with descriptions of its counties, cities and villages, its agricultural, manufacturing, mining and business development, sketches of eminent and interesting characters, etc., with notes of a tour over it in 1886.
The Ohio Centennial Edition - Henry Howe, LL.D. [© 1888]